Ferrari: The Evolution of the Front-Engined V12 / Grand Tourer 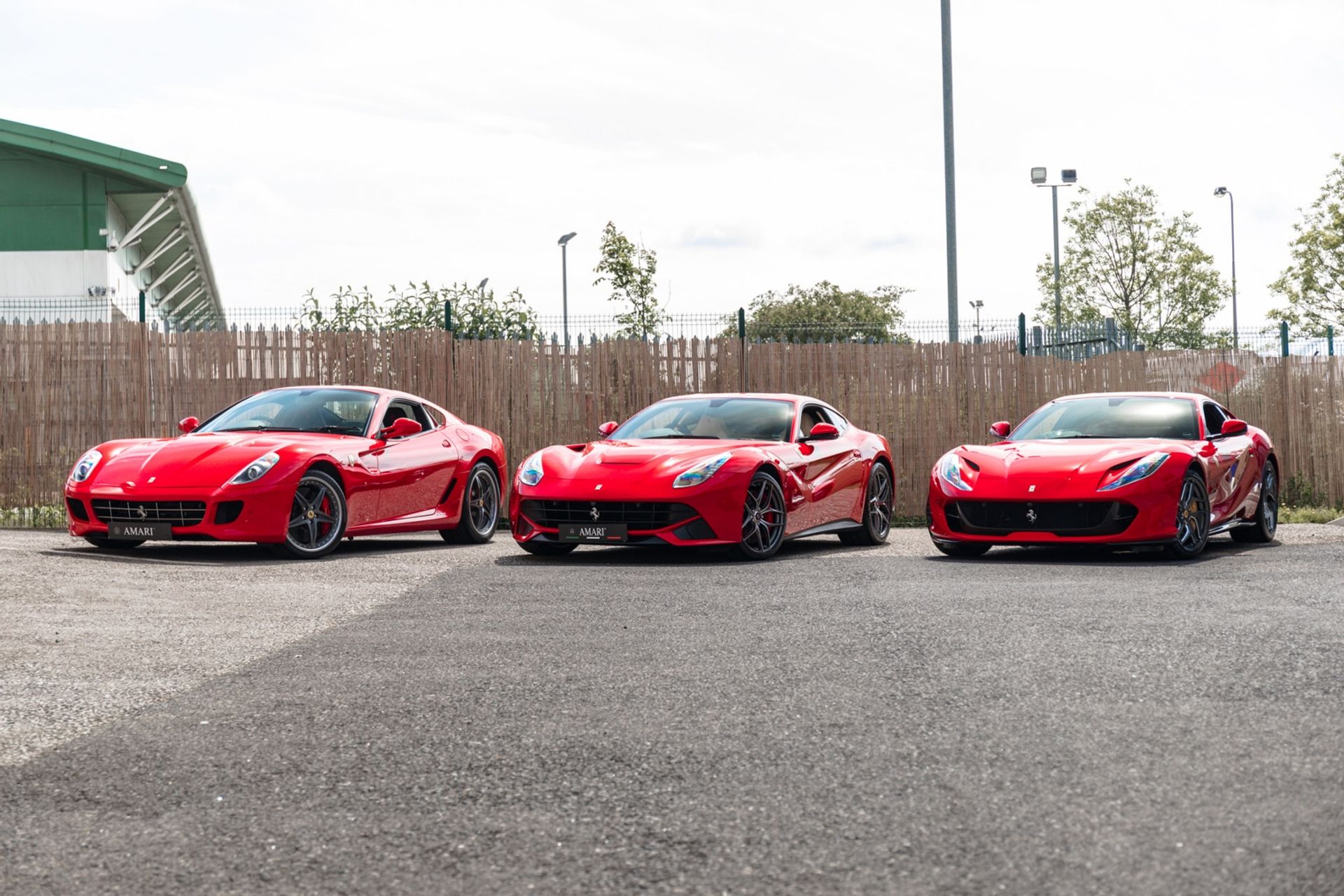 The horses and stallions go in front and pull the cart, they don’t push it. Ferrari’s top GT road models remained defiantly front-engined until the mid-1970s, while the Company’s Formula One cars switched to a mid-engined format in the early 1960s. Following a lengthy hiatus, Ferrari has returned to this signature technical solution for the road, building on a formidable tradition of elegance and majesty. Looking forwards, it is clear Ferrari aim to continue its legacy of front engined V12s, with the introduction of Ferrari’s latest 812 GTS unveiled just weeks ago (9 Sept 2019). Amari Supercars looks back on the history of the glorious V12, what made it so iconic, what you can currently buy today, and what to expect in the future.

Ferrari’s first road cars ever produced were V12 grand tourers. It’s been running through the veins of the Prancing Horse ever since the days when Enzo Ferrari himself put pen to paper at his office in Fiorano. Looking back through the Prancing Horse’s impressive archive, other front-engined models of note include the Ferrari 250. It was the marque’s most successful early supercar (built between 1952 and 1964), which spawned one of the most successful racing variants in Ferrari’s history; the 250 Testa Rossa. The 250 GTO is another highlight of which only 36 were ever made. To date, the 250 GTO is the most expensive car to sell at auction, reaching $48.4 million (£37.5m) in Monetary, California 2018 (CNBC).

The long-wheelbase Ferrari 250 GT Berlinetta earned the Tour de France name after winning the 10-day race, similarly, the 250 GTO earning its name which stands for Gran Turismo Omologata, Italian for “Grand Touring Homologated.” These very cars are the inspiration for the modern-day interpretations we know today, the Ferrari F12 TDF and Ferrari 599 GTO. Just 36 of the 250 GTOs were manufactured between 1962 and 1964. After an incredibly successful racing career, the 250 GTO proved a design pinnacle for front-engine race cars. Its 2953cc V12 featured Ferrari Testa Rossa heads and larger valves and was topped with an impressive row of six double-barrel Weber carburettors.

Ferrari 365 GTB/4 Daytona for sale at Amari Supercars
By the late 1960s, the stallions were most definitely pushing the contemporary supercar. Rivals had adopted the mid-engined set-up, however the 1968’s Ferrari 365 GTB/4 Daytona remained irreplaceable. Powered by a mighty 352hp, 4.3-litre V12, the Daytona is for many the ultimate front-engined GT Ferrari. Today, the 812 Superfast channels its indomitable spirit, marrying a body of great aerodynamic sophistication with a 789hp, 6.5-litre V12. A worthy heir to the V12 throne.

Ferrari designed the 599 GTB Fiorano with several objectives in mind: to ensure comfort, great ergonomics and safety, to increase performance and to guarantee driving pleasure. Styled by Pininfarina under Ken Okuyama and the direction of Ferrari’s Frank Stephenson, known as one of most influential automotive designers of our time, the 599 designers wanted to explore radically innovative lines. Optimisation of the car’s aerodynamics delivered cutting-edge down-force figures. Development often took place in a wind tunnel, where hours of testing ensured that the minimum of drag was combined with constant downforce regardless of set up. Styling details such as the tail incorporated Ferrari’s characteristic twin circular lights while the front brake ducts and hot air outlets behind the front wheel arches remembered the great competizione Ferraris of the past. Ferrari dropped the tubular steel chassis of the 550/575, adopting a lighter and more advanced all-aluminium chassis of significantly increased stiffness.

The area around the cockpit also received an original aerodynamic design. Two prominent flying buttresses wrap around the rear window channelling air towards the nolder, giving the car a unique look whilst adding a twist of aerodynamic ingenuity. When it came to the rear of the car, Ferrari abandoned the low-fixed licence plate and now signature circular quad rear lights. When it came the front, the 599 retained swooping lines distinct to the flagship front-engined V12 Berlinetta’s. The heart of any Ferrari is its engine, and the 599’s 6.0-litre V12 is a reworked version of that found in the Ferrari Enzo, mated with the F1 derived paddle shift gearbox.

Production of the 599 ended in 2012 and while there are many on the market, there are always things to look out for. With the 599 GTB Fiorano makes up the majority of the 599s you will see for sale, there are certainly others within which offer even greater rarity. All GTBs sold in the United Kingdom will have carbon-ceramic brakes and the F1 gearbox but there were a few cars in other markets with steel brakes and a six-speed manual. Special editions including the HGTE, GTO, SA Aperta and those converted with aftermarket Novitec and Hamann packages. These cars are definitely worth seeking out, and AMARI Supercars is able to offer a range of these today. Currently in stock we have the Ferrari 599 GTB Fiorano with Novitec Package as shown above.

And now we arrive at the Ferocious Ferrari F12. Introduced to the motoring public at the 2012 Geneva Motor Show, the F12 was a breath of fresh air. It replaced the 599 family of front-engined Gran Turismos. Ferrari’s gorgeous new Berlinetta was soon garnering critical accolades, being voted ‘Supercar of the Year 2012’ by Top Gear magazine, and in 2014 receiving the coveted ‘Premio Compasso d’Oro ADI’, one of the world’s oldest and most prestigious design awards.

Styled by the Ferrari Styling Centre and Carrozzeria Pininfarina, the F12’s voluptuous body and harmonious lines restated the already established look of its predecessors – a long bonnet, short tail, and small cabin. One of Pininfarina’s countless masterpieces, the refined looks boasted aggressive style yet retained all the elegance associated with Pininfarina’s work for Maranello.

The F12’s 6.3-litre, 65-degree, normally aspirated V12 is one of the true greats. With 730bhp on tap, this award-winning power unit delivers stupendous performance, propelling the F12 to 62mph in 3.1 seconds on its way to a top speed of 211mph.

On new model test day prior to its release, the F12 was quicker than the 599 GTB by a whopping 3.5 seconds. This was to be expected from the fierce successor, equipped with one of the most powerful engines ever installed in a road-going Ferrari. It was also quicker than the mid-engined Enzo by 2 seconds and even the hardcore 599 GTO by 1 second. And all that in a comfortable and civilised Gran Turismo.

When it comes to purchasing a Ferrari used, it all comes down to three key points: options, options, and options. The F12 has many options to choose from, and since the car is no longer made to spec, it is good to get familiar with the options you like best. When looking for an F12, we’d suggest the more iconic colour combinations of Rosso/Crema, Rosso/Tan or Rosso/Nero or Grigio Silverstone, and if you want to go for a more menacing look then the Black on Black F12s are attractive options for resale pounds. While many fear that the cost of maintaining a Ferrari will be through the roof, that isn’t the case with any Ferrari built after 2012. At Amari Supercars, we pride ourselves on selling only the very best F12 examples. See our stock listing and feast your eyes on our full range of F12s available for sale today.

The first and most demanding challenge Ferrari always faces when it takes the leap in developing a new car is to push the boundaries of its own accomplishments yet again. This is made all the more challenging when the task at hand involves re-designing a 12-cylinder engine, the power unit that hailed the start Ferrari over 70 years ago in 1947. For the latest model, intensive research and development focused on utilising Ferrari’s wealth of track-derived engineering. This very know-how has produced the 812 Superfast, designed to offer its pilot both benchmark performance across the board and the most engaging and rewarding driving experience possible. Customer response to it was unbelievable and within a matter of weeks all the UK’s allocation for the next two and half years had sold out, with many seeing this car as the last pure V12 to leave the gates of Maranello.

Ferrari connoisseurs may concern themselves with the fact that the Superfast features an electrically assisted power steering system, Ferrari’s first, combined with a predominantly aluminium construction to create a lightweight feel during even during vibrant driving. Carbon fibre, which in today’s market is an industry standard, is mostly used for aesthetics rather than structural contributions. However, standard stability control can be turned off at will, allowing for side-ways track fun despite the massive rubber contributing to Superfast’s otherwise impressive 1.03 g of lateral acceleration.

As Ferrari’s flagship GT product, buyers certainly won’t expect the 812 Superfast to come easy. Of course, actually buying the 812 Superfast from Ferrari will likely require a strong relationship with the brand, so second-hand examples may up the ante even further. Although Ferrari are saying these are hard to get hold of, here at Amari Supercars we have sold many. We offer a wide selection of the latest and greatest specified examples of the 812 Superfast, enabling our customers to beat the queues, and we are looking forward to it being one of our most successful models.

The future of Front Engined Ferraris

The new 812 GTS sees a return to V12 convertibles that we haven’t seen decades. Aside from special editions (including the Superamerica and SA Aperta) that were limited to few models, this is the first time we see a production run of front-engine V12 since the 1969 365 GTS4. The 812 GTS keeps the 790 horsepower 6.5-litre V12 with 530 lb-ft of torque from its hardtop Superfast sibling. It is therefore said to be the most powerful convertible currently in production.

The future for Ferrari certainly seems bright. The message being conveyed is clear; more Ferraris are coming. From now until 2022 we’ll expect to see more electrified as hybrid models, with hybrid production by 2020 reaching 60 percent. The company’s future will be “equal to its past,” said Ferrari President John Elkann at Capital Markets Day. With 15 new products in the pipeline, several of which we have already unveiled, Ferrari aim to follow current market trends and the GT family will be expanded to approximately 40 percent of total production bringing back the concept of a grand GT car to its origins with Ferrari. For the Ferrari connoisseur, we can only hope these ignite the same V12 passion they are famous for. Only time will tell…